An enduring icon of the Italian capital, the Trevi Fountain is a breathtaking piece of art that attracts millions to its waters every year. Learn more below...

If you’re planning a visit to Rome, chances are you’ve been inspired by many Hollywood films set here: Roman Holiday, La Dolce Vita and even The Lizzie McGuire Film if you’re a millennial. One thing all these three films have in common is that they all feature the most famous fountain in Rome, the Trevi Fountain. 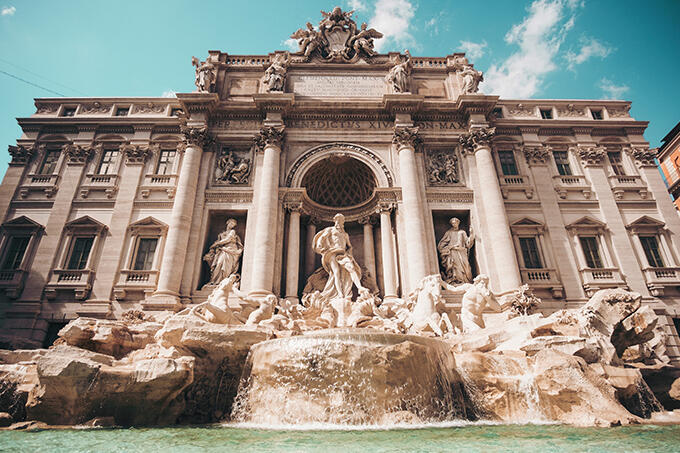 Dating all the way back to 19BC, this Rome water fountain is known to locals as Fontana di Trevi and persists as one of the capital’s most photographed sights. As a stunning example of Baroque art and architecture, it actually was created with a pragmatic purpose in mind - to round off an aqueduct and bring water to the townspeople. Nowadays however, it’s one of Rome’s biggest tourist draws and is always surrounded by people throwing coins into its depths. Constructed by Roman architect Nicola Salvi and completed by Giuseppe Pannini, this Rome fountain pays homage to ancient Roman mythology with the god of the sea Neptune at its centre. Standing astride a shell chariot led by sea horses and flanked by allegorical statues of Abundance and Salubrity, it took nearly three centuries to complete and has changed over the years. However, the Rome Trevi Fountain has never looked better following a recent €2.2 million restoration process.

If all roads lead to Rome, then most roads in Rome lead to the Trevi Fountain. Located in the heart of the city nearby the Via Del Tritone, it sits proudly in the centre of Piazza di Trevi. Easily accessible from the Barberini Metro station, it’s also just a few steps from another famous Roman sight: the Spanish Steps. 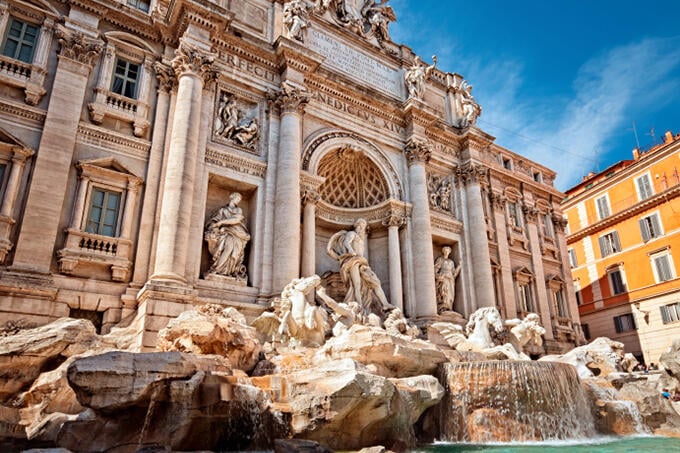 As one of Rome’s most popular attractions, the Trevi Fountain is always packed with people daily. For budding photographers seeking an emptier shot and those leery of crowds, it’s best to head here early in the morning to see it in daylight. The Rome fountain completely changes at night, when lights are switched on to illuminate the ivory sculptures for a totally different and atmospheric experience. Wander here after dinner when the crowds have abated for a unique experience after the rest of the tourist pack have retired to their hotels for the night.

Attractions nearby the Trevi Fountain

As one of the most centrally located attractions in Rome, the Trevi Fountain is within walking distance of many iconic landmarks in the capital. The Spanish Steps are the closest by alongside Villa Borghese and its famous gallery a little further along in that direction, while the heading in the opposite direction will take you towards the Pantheon and even the Roman Forum if you’re up for a bit of a walk. 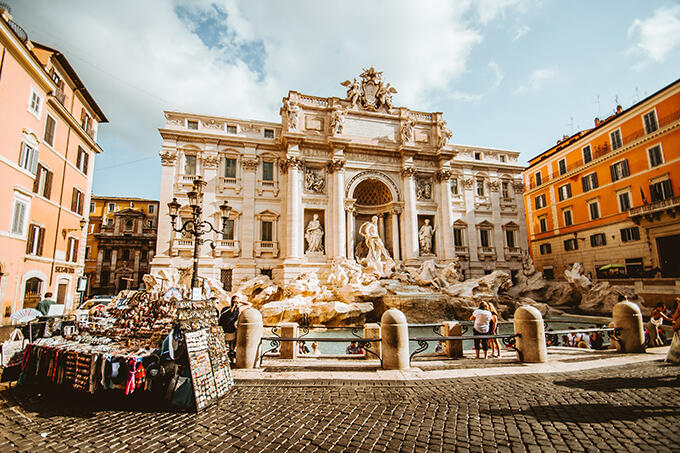 If you’re heading to Trevi Fountain, remember to bring some change. The most popular legend surrounding this famous fountain in Rome dates all the way back to ancient times, granting travellers to the city a safe return to the capital. It’s said that if you turn your back to the fountain and throw a coin with your right hand over your left shoulder, you will be certain to return to Rome in the future. Chances are you’ll spot lots of other tourists doing the same thing and to be honest, who doesn’t want to come back to Rome? Fans of the film Three Coins in the Trevi Fountain may already be aware of the other legend surrounding the fountain, which also builds on the coin-throwing practice. As the title of the film suggests, visitors should throw three coins into the fountain as the first guarantees safe passage, the second a new romance and the third a successful marriage. Even if you’re not particularly superstitious, participating in the harmless tradition of throwing a coin into the fountain actually helps the city. The money from the fountain is collected daily and it is said 3000 Euros are thrown in a day, with proceeds going towards charities that help people in need.
Tags
Attractions in Rome
Previous post